In this life, there are many rash decisions that ultimately cost the people who cost them millions. Suffice it to refer to Warren Buffett and his Dexter Shoe Company, Carl Icahn’s purchase and acquisition of Blockbuster LLC, or at least the man who recently bet nearly half a million on the Chargers’ halftime victory. .

What unites almost all bad decisions is that almost all of them were made with only good intentions. And, most likely, lack of information, knowledge, or just plain bad luck. In other words, everything starts the same, but the result is always different.

For example, as it happened In this storywhich appeared in the Reddit Malicious Compliance community a few days ago under the authorship of user u/thernker, and has already garnered over 5.8K votes and over 350 different comments. We will talk about the glorious times of the mid-00s, when the technologies were already quite advanced, but the managers making decisions about their implementation were not always there.

The author of the post led back office processes for a shared service center in the mid-00s.

So, in those years the author of the original post led the back office process for a shared service center that was owned by a large European telecommunications company. In turn, the offshore unit was based in India. One of the processes the original poster’s team had to deal with was SIM activation, and yes, in those glory days, it was a manual procedure.

An important procedure in those days was to activate the SIM card, which was usually done manually.

The activation data of the new SIM card came into the Excel sheet, and then one of the team members manually activated the card based on some pre-requisite checks. And this method was really a lot of work. According to the OP, there were fifteen people on the team at the time, and they literally worked 24/7. 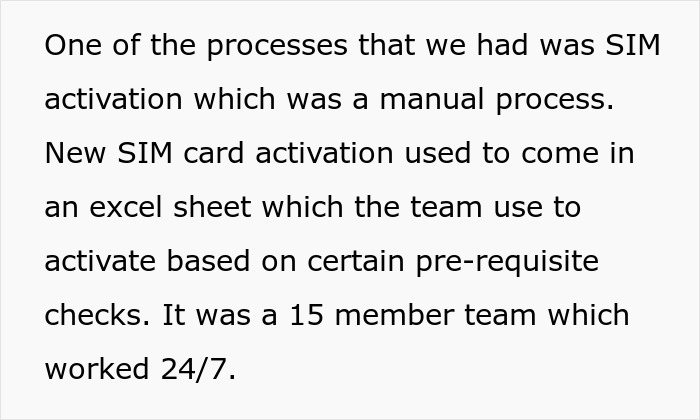 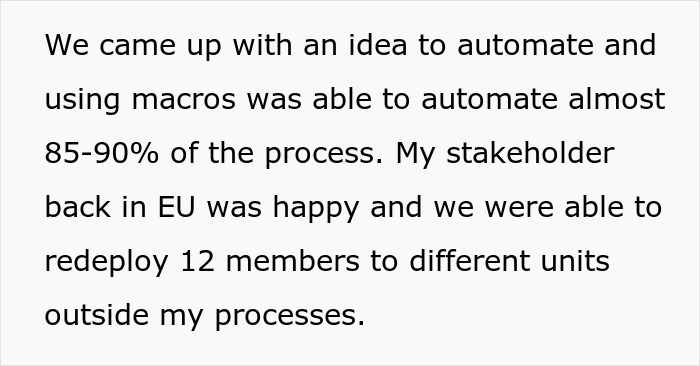 One day they simply automated the activation using a macro in an Excel sheet – and it turned out to be a free but effective solution.

As often happens, at some point, the idea arose to automate this process – for example, the use of macros, which made it possible to reduce the amount of manual work on the procedure by about 85-90%. As the OP recalls, the stakeholder in Europe was happy about this and thus they were able to redeploy 12 members to different units outside of the team process. And then this happened… 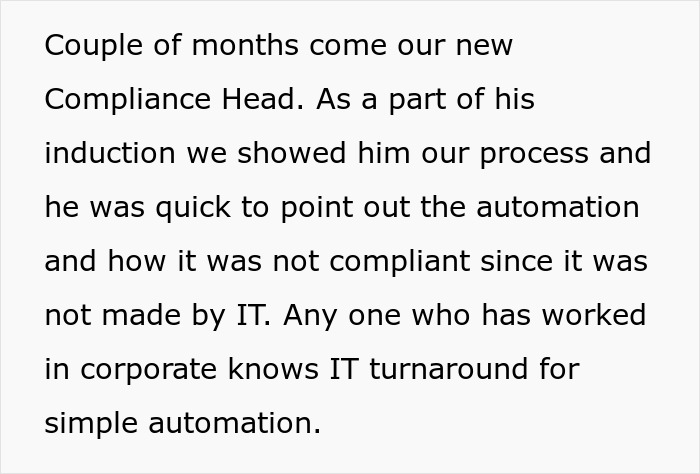 A few months later, a new compliance head appeared at the company. When the manager was moved, of course, he was also shown the new automated procedure for activating SIM cards, but the new superior was not exactly thrilled. According to the manager, the main problem with this solution was that it was developed with the involvement of external resources rather than within the company. 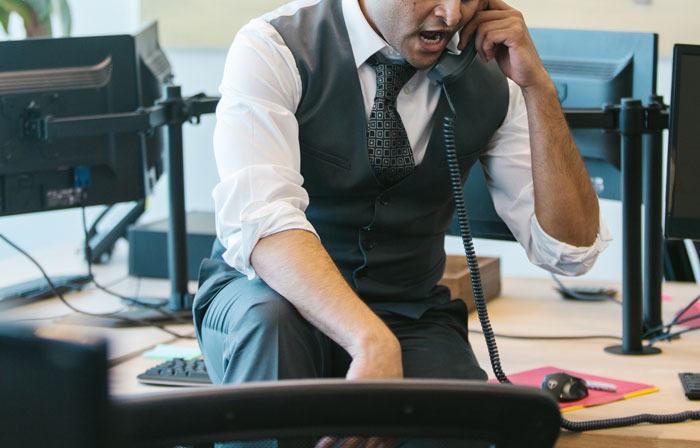 Several weeks later a new head of compliance was hired – and he immediately demanded that the team ditch the solution and revert to manual activation.

As the original poster notes, this was hardly a security risk – the macro didn’t use system credentials and certainly didn’t have access to the Internet. But despite this, the new boss demanded that everything be fixed immediately. His understanding of “fixing everything” meant immediately turning off automatic activation of SIM cards and asking the IT department to come up with their own solution – but for now, doing everything the old-fashioned way. Do it manually.

The head of compliance didn’t take into account two incredibly important factors. First, the majority of team members were already working on other projects. Then the second thing is that it was Friday. However, no argument swayed the authorities, and they had to comply. Of course, maliciously – what else could the original poster do? 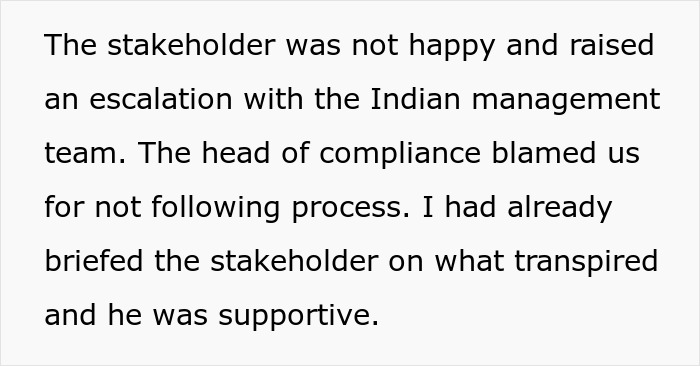 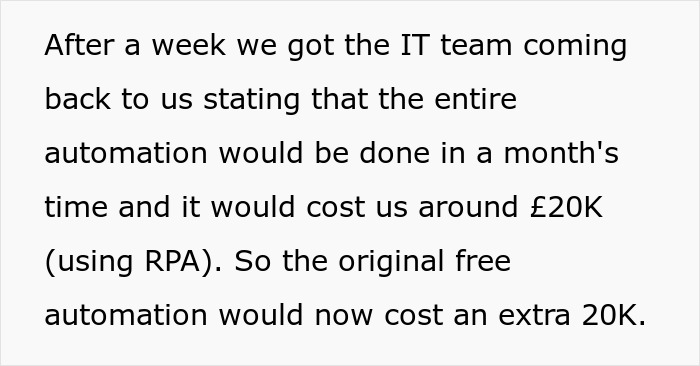 The weekend was absolutely horrible – the rest of the team, of course, couldn’t deal with the avalanche of activations that hit them, causing the company to suffer a lot of escalations and complaints. The head of compliance immediately blamed the OP and his team for not following the process, but they contacted the stakeholder and briefly explained the situation and what actually caused it. The stakeholder, as the post’s author recalls, was supportive. 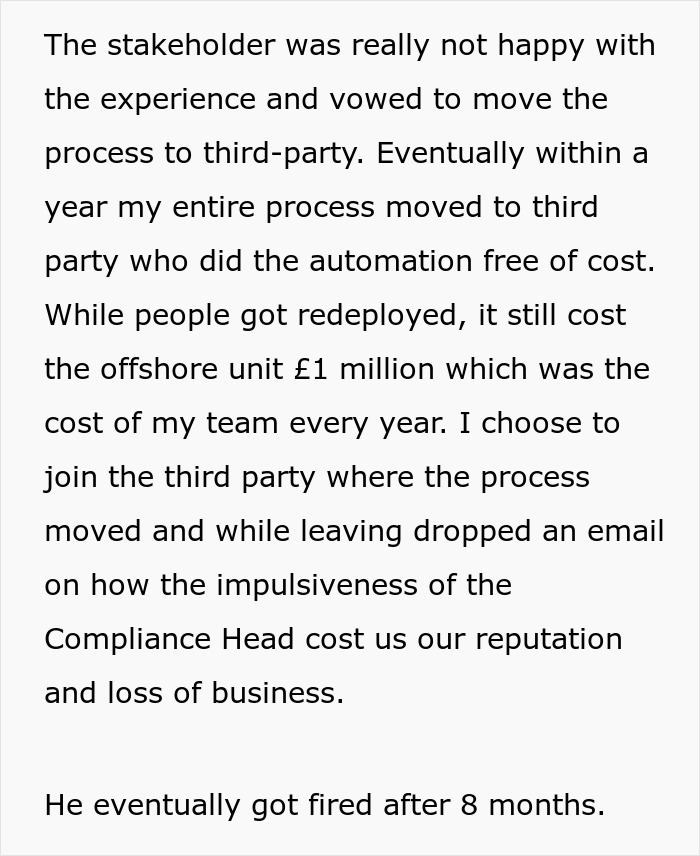 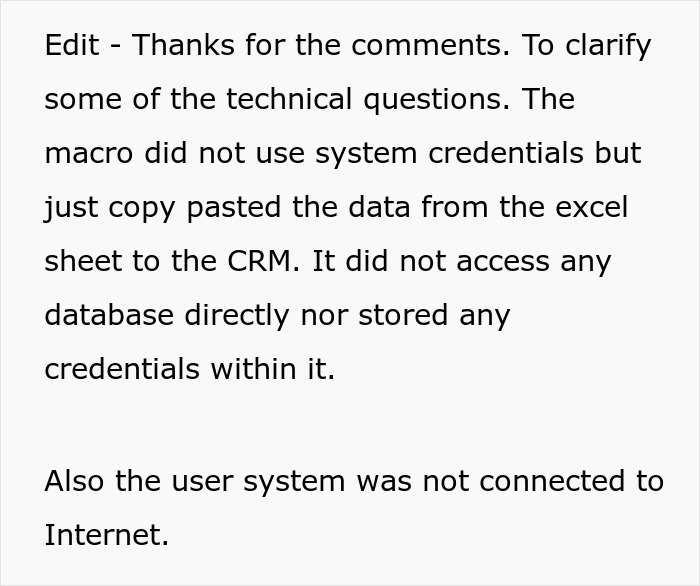 A week later, the IT team reported that it would take a month to develop and implement their own automation solution, and it would all cost £20K (using RPA). Just let us remind you that the initial solution was free. Of course, the stakeholder was not happy and suggested outsourcing the entire process to a third party. In the end, so it turned out and third parties did free automation. True, while the employees were redeployed, as the OP recalls, the offshore unit still cost £1 million, which was the cost of their team per year. 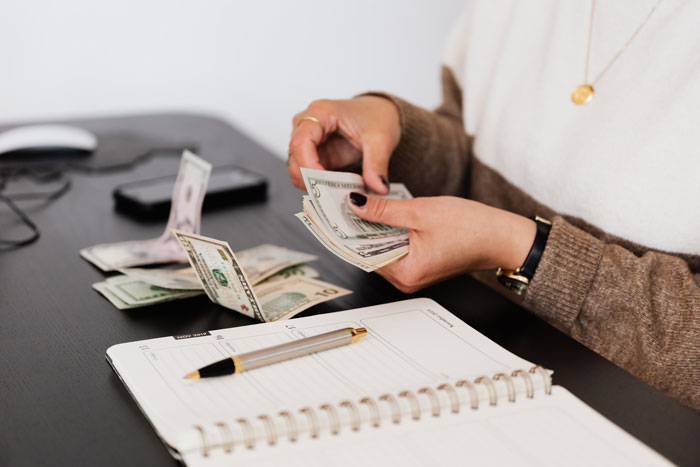 Before resigning himself, the author dropped an email describing the compliance head’s behavior and fired him.

After some time, the original poster decided to join a third party himself, and before leaving, he simply dropped an email detailing how the compliance head encouraged the company. His reputation and business suffered. As icing on the cake, the OP mentions that the compliance head was finally fired after eight months.

People in the comments claim that such a situation is, alas, not uncommon in contemporary business

As some have said in the comments, both sides can be understood here in principle, and this is called “shadow IT”. Imagine you have a problem that you solve with an external solution. But now IT comes into play, for which it is nothing more than an unknown “system” on which the entire business now depends. And it’s not clear to them what can be done about it.

On the other hand, other commentators claim that it is also quite common for new bosses to appear and want to prove themselves literally from the first day of work. “They inevitably make things more complicated and annoy everyone in the process. This, however, goes above and beyond,” laments the commentator.

If you liked the whole topic about toxic managers, you’ll probably appreciate our post about the assistant manager who responded to constant bullying by suspending almost all of her staff for giving her the silent treatment. spoiled himself. Anyway, if you have faced or witnessed a similar situation, please feel free to share it in the comments. 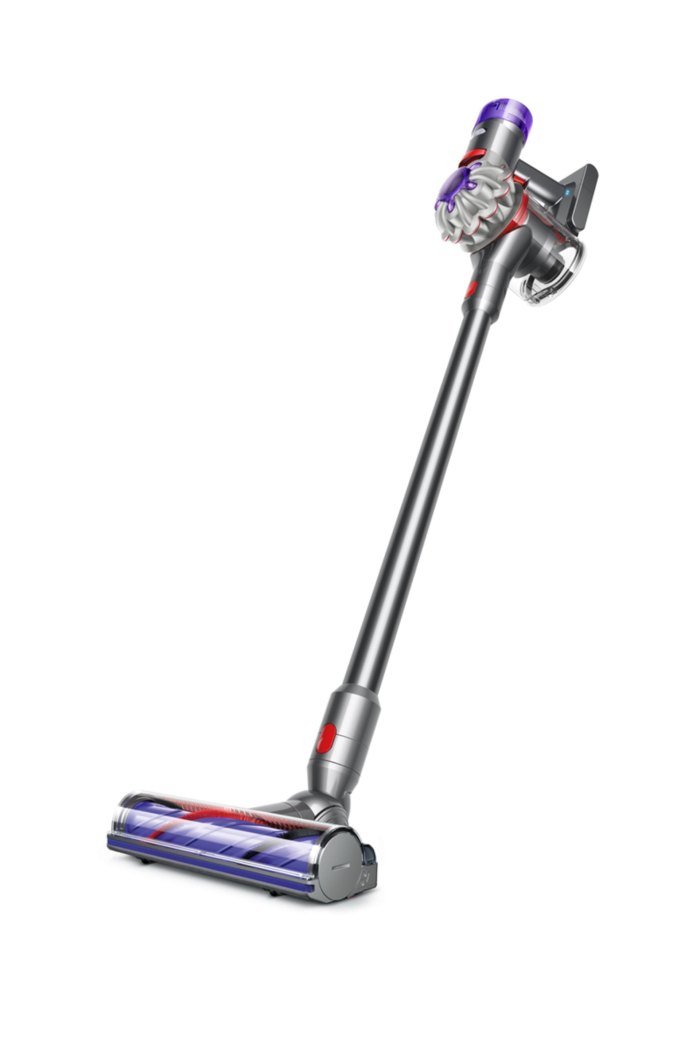 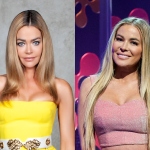